It is important before you sign any contract documents that you take time to read the terms and conditions and that you understand what you are signing.

The Joneses (not their real names) went to a dealership and bought a second-hand car under finance.  They  advised the salesperson of the interest rate they could afford to pay for any finance contract.  Finance and insurance were approved instantly for them and they paid the deposit for the car. 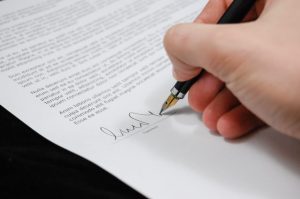 A week later, the Joneses went to collect the car. The salesperson confirmed the new weekly repayments but did not say anything about the extended contract period, or about the new interest rate.  The Joneses signed the contract without reading it. They simply relied on what they understood the salesperson to have said.

Later, the Joneses found out that the contract period had been extended and the interest rate was much higher than they had originally discussed with the salesperson.

They approached CCLSWA, who  negotiated with the dealership on their behalf for a new contract.

While the outcome for the Joneses was positive and the dealership agreed to a new contract, not every situation has such a positive outcome.

It is essential that you read any contract before you sign it and make sure that the terms and conditions of the contract are as you understand them to be.

If you require advice on a credit or consumer matter, please call Consumer Credit Legal Service (WA) Inc. on (08) 9221 7066 for a free, confidential discussion. Our telephone advice line is open Monday to Friday (except public holidays) from 9am to 4pm.